Study of the filtering effects of a protective pollen grid by order of L. van Heek Textiles b.v., Holland

By order of L. van Heek Textiles b.v., a produce made of textile was tested for its ability to filter floating pollens from the air. A feasibility test was conducted to see if pollen could be prevented from intruding into interior rooms by means of a protective pollen grid, during both low and high pollen floating.

The measurements took place in an experimental “Pollenroom” with two empty rooms.

- The rooms (to be indicated as Room A and Room B) are part of a pollen room, divided into two rooms, situated at the top floor of the “Klinik fur Dermatologie, Venerologie und Allergologie der Charite Berlin, Luisenstr. 2-5, 10117 Berlin”

- The rooms were cleaned thoroughly, both wet and mechanically, before conducting the study. The rooms were only entered for checking the Burkard-pollen trap.

- The protective pollen grid, supplied by van Heek, was fixed to the windowsill of the open window between the two rooms, by means of Velcro. The measurements of this window are 49x49 cm.

- Room B (15.9m3 ) represented the outside air, containing pollen. In this room, several pollen of different sizes were released by means of a standardized procedure. If the window was opened, they could invade Room A, which represented a home situation, e.g. a bedroom.

- The measurements of the pollen that penetrated into Room A (16.6m3 ) took place by means of a so called Burkard-Pollen trap (a standardized technique in Europe) (1), that was positioned in the room.

- The analysis of the pollen trap was carried out by an experienced pollen analyst within the framework of this study in the allergy centre of the Charite in Berlin. The originating compounds were archived, to be at hand in case of a posterior check up.

- The preparation technique, purpose and analysis of the pollen captured by means of the Burkard trap, took place according to the current recommendations of the “Stiftung Deutscher Polleninformationsdienst” (German foundation, information centre for pollen).

(Detailed description (2)) In order to inform readers who are inexperienced in the field of allergies, we will deal with some issues that will benefit the understanding of the objectives of this study.

If pollen grains contact with the moist mucous membrane in either nose, eye, mouth or bronchi, they will be transferred within a few seconds from a resting to an active state. The contents of the pollen grains is released. It involves carbohydrates, fat and proteins. Especially the proteins are liable to have allergic effects. Each pollen has several miscellaneous allergens, that are typical of one or more plants at the same time. A healthy person without hereditary disposition for allergies will not react to the contents of pollen in his nasal mucous membrane. However, a person who is inclined towards allergies will start producing antibodies against allergens from pollen in certain cells of the mucous membrane. These antibodies can be found in mucous membranes, blood and skin. In case of repeated contact with pollen allergens, those inclined to have an allergy, will develop rhinitis, conjunctivitis (eye inflammation) or an allergic pollen asthma. If rhinitis or conjunctivitis emerges, the disease is referred to as a hay fever. In case there are also asthmatic symptoms, the symptoms are indicated as pollinosis. In most cases the symptoms start with a hay fever and will develop into a pollen asthma in one out of three persons, this is described as “floor change”e.g. as a change from the higher floor of the nose to the lower floor of the bronchi. If the pollen impinge on the throat, a sore throat, hoarseness and a claustrophobic feeling in the throat area may occur. One person in two, suffering from hay fever, is likely to develop a so called oral allergy syndrome after a few years, e.g. symptoms in the mouth may occur after eating fruit, such as apples, cherries or kiwis, in which there are allergens that resemble pollen allergens. Further information on symptoms can be found in relevant books.

Amongst the multitude of many different species of pollen in Germany, some have special allergenic significance, seeing that they are responsible for the greatest number of pollen diseases. It involves the following sorts, respectively groups of pollen (3):

1. Birchpollen (Betula) with an average diameter of 19 to 22 um, floating time from March to April.

2. Grasspollen: here all sorts of wild sweet grass (poaceae) are subsumed with an average diameter of 20 to 40 um, floating time from May to September.

3. Stinging nettles (Urtica) with an average diameter of 13 to 15 um, floating time from June to September.

4. Ambrosia pollen with an average diameter of 17 to 18 um, floating time from August to October.

Each hereafter mentioned species of pollen was tested in detail as follows.

1. In Room A the quantity of invaded pollen from Room B (the outside air) was measured over a period of eight hours, while the window was open (without a pollen filter).

2. While the window was closed, the full purity of pollen in Room A was measured.

3. Using the pollen filter in the windowsill, the concentration of pollen in Room A was measured over a period of 8 hours after releasing the pollen. These measurements were conducted regularly three times in the same manner.

The quantity of pollen in Room A, using the filter, was expressed in a percentage of the quantity of pollen that invaded the room while the window was open, i.e. without a filter. Depending on the distribution and number of detectable pollen, periods of time varied from one hour (stingy nettles), two hours (birch) to resp. eight hours (grasses, ambrosia).

While the window was closed, no birch pollen were found in Room A within two hours. After the release of 32 mg birch pollen in Room B during three separate attempts, 0,72%, 0.69% and 0.68% birch pollen were accounted for in comparison to the window being opened. (picture 1) The protective effect of the pollen filter thus amounted to 99.71% with birch pollen (median value). This implies a total protection of birch pollen by means of the filter.

With the window closed, one ambrosia pollen was found within two hours in Room A. After the release of 32 mg ambrosia pollen each time in Room B, 7,4%, 9,1% and 9,2% ambrosia pollen were found during the trials, compared to the situation of an open window. (picture 4) The protective effect of the pollen filter for ambrosia pollen thus amounted to 90,9% (median value). This means a safe degree of protection by means of the filter. 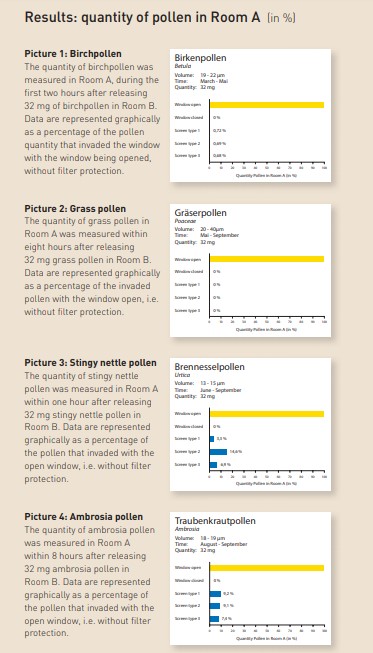 The tested textile material demonstrates a very high effectiveness in the stoppage of pollen floating in the air. The allergenic important birch- and grass pollen were prevented almost completely from invading a room by the tested pollen filtering material by almost 97, resp. 100% percent. Even the very small stingy nettle pollen were almost completely prevented from invading through a window, if provided with a pollen filter. Likewise, ambrosia pollen were stopped by the pollen filter material. In accordance with these data, the material is suited to offer an effective protection against pollen from the outside air to allergenic persons. 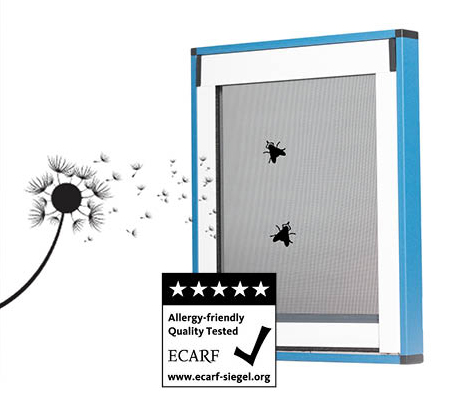